Much has been affected by Coronavirus this year, including our annual Christmas Dinner!  National restrictions meant we weren’t able to meet as in other years so we did the best we could and held a Virtual Christmas Dinner.  Orders were place on a local caterer, Vintage Hog Roasting Co, who delivered prepared Christmas meals to each of our members.  We all then dressed in our festive outfits and joined together on Zoom.  We split into smaller meeting rooms, each with 3 or 4 members, for each course so by the end of the meeting we had eaten a delicious Christmas meal with different company for each course.

We entertained ourselves with a few games of bingo.  We charged each entrant £5.00 and gave half the proceeds as pize money and put the balance in our charity account.

Covid regulations only allowed three couples to meet outside so we organised two countryside walks.  Those taking part enjoyed a few hours in fresh air and some well-needed exercise 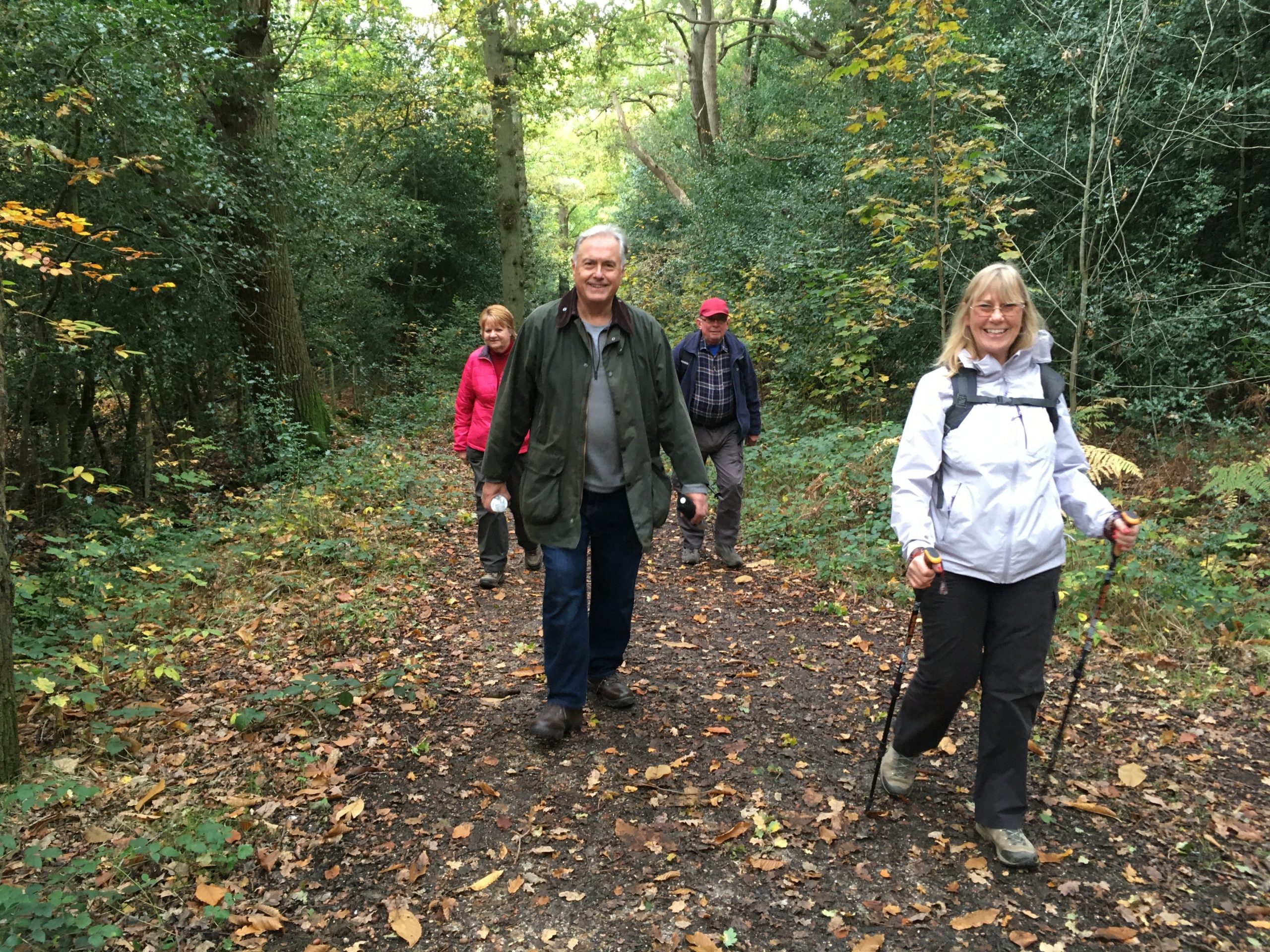 We asked members to offer a short presentation of their favourite drink.  Oferrings varied from a cup of tea to a complicated cocktail.  It gave us the opportunity to spend a convivial evening together.

Some of our members took part in a Covid-friendly treasure hunt.  The could follow the clues either by car or from home using Google Street View.

Our annual Christmas Dinner is always a very popular event for our members, and this year was no exception.  As in previous years it was held at Bearwood Lakes Golf Club which is an ideal venue 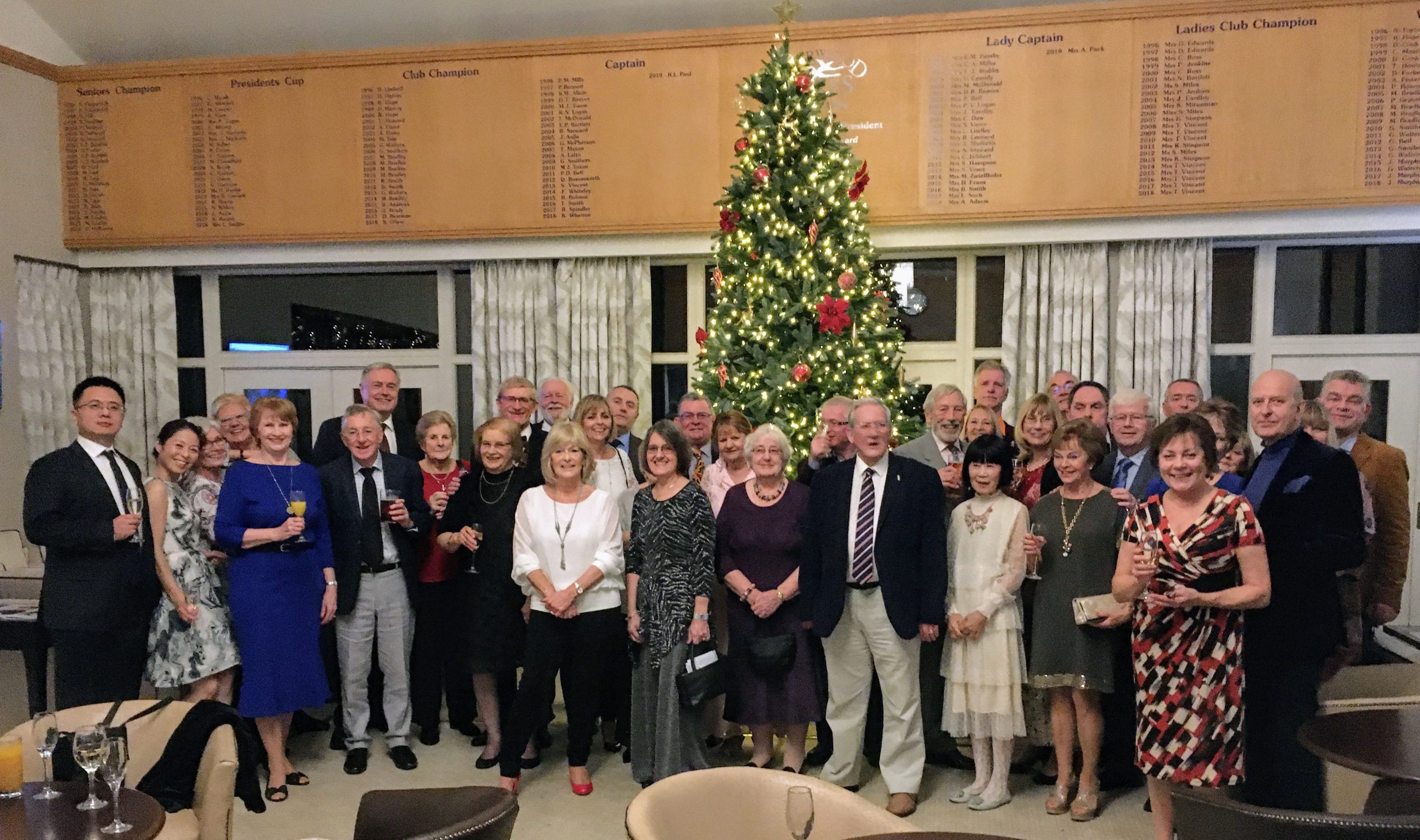 Bring-a-Dish is a popular event, where each member brings a contribution to a four-course meal.  There is thus plenty of choice, and invariably there is more food than can be eaten!  We held it a WADE (Wokingham and District Association for the Elderly), which is a local charity that we regularly support.  They have a large dining room and a well-equippped kitchen, so it is an ideal venue. 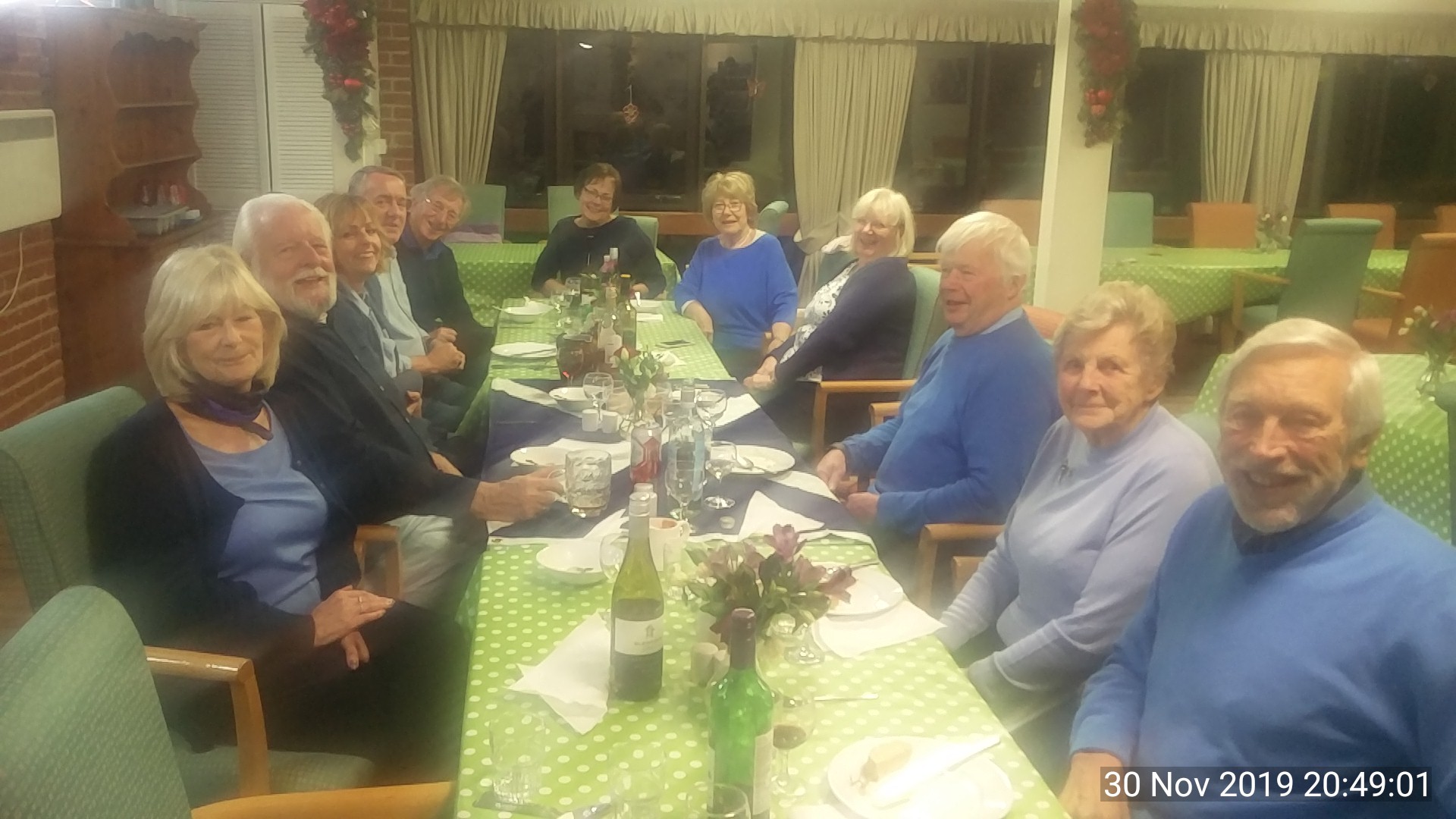 About 20 of us spent an enjoyable evening at the Queens Head playing Aunt Sally.  The game is played by throwing timber batons at a wooden skittle (known as a doll or dolly) on top of a post.  It dates back to the 17th century, but is still played in a small number of pubs in the Thames Valley.

After the game we had a fish and chip supper 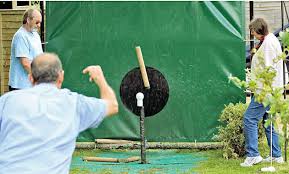 Paul and Lyn Baily hosted a lovely night out for about 24 of us in their garden.  We enjoyed a sumptious meal expertly barbecued by Paul and great sides and desserts prepared by Lyn (with the help of other ladies)

The Charter Lunch is our traditional annual event to mark the start of a new financial year, to celebrate the achievements of the previous year and to welcome the new president.  This year’s lunch was held in the glorious surroundings of Wokingham Town Hall.  After a nice meal the outgoing president, Debbie Slay, welcomed the new president, Lyn Baily: 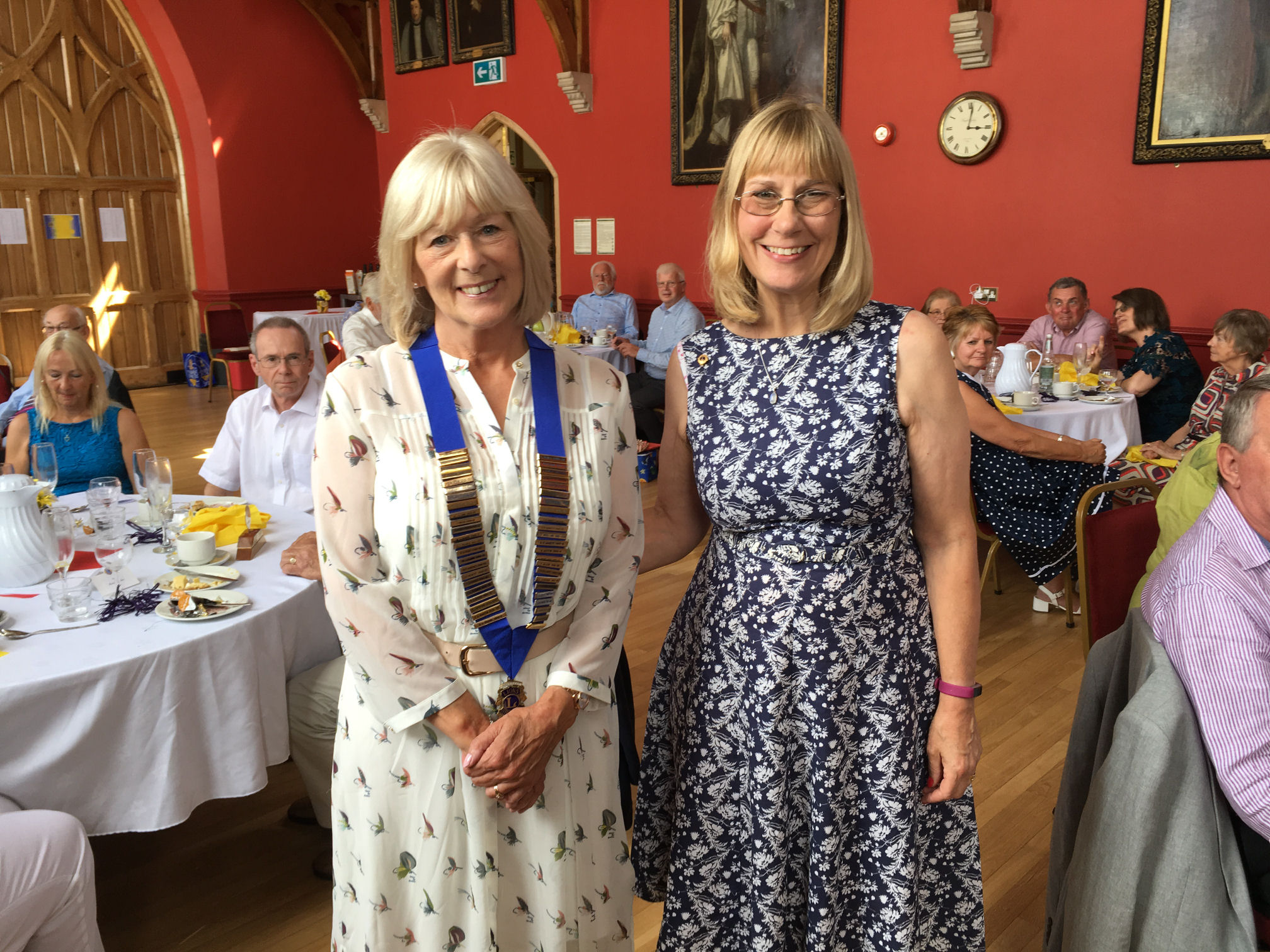 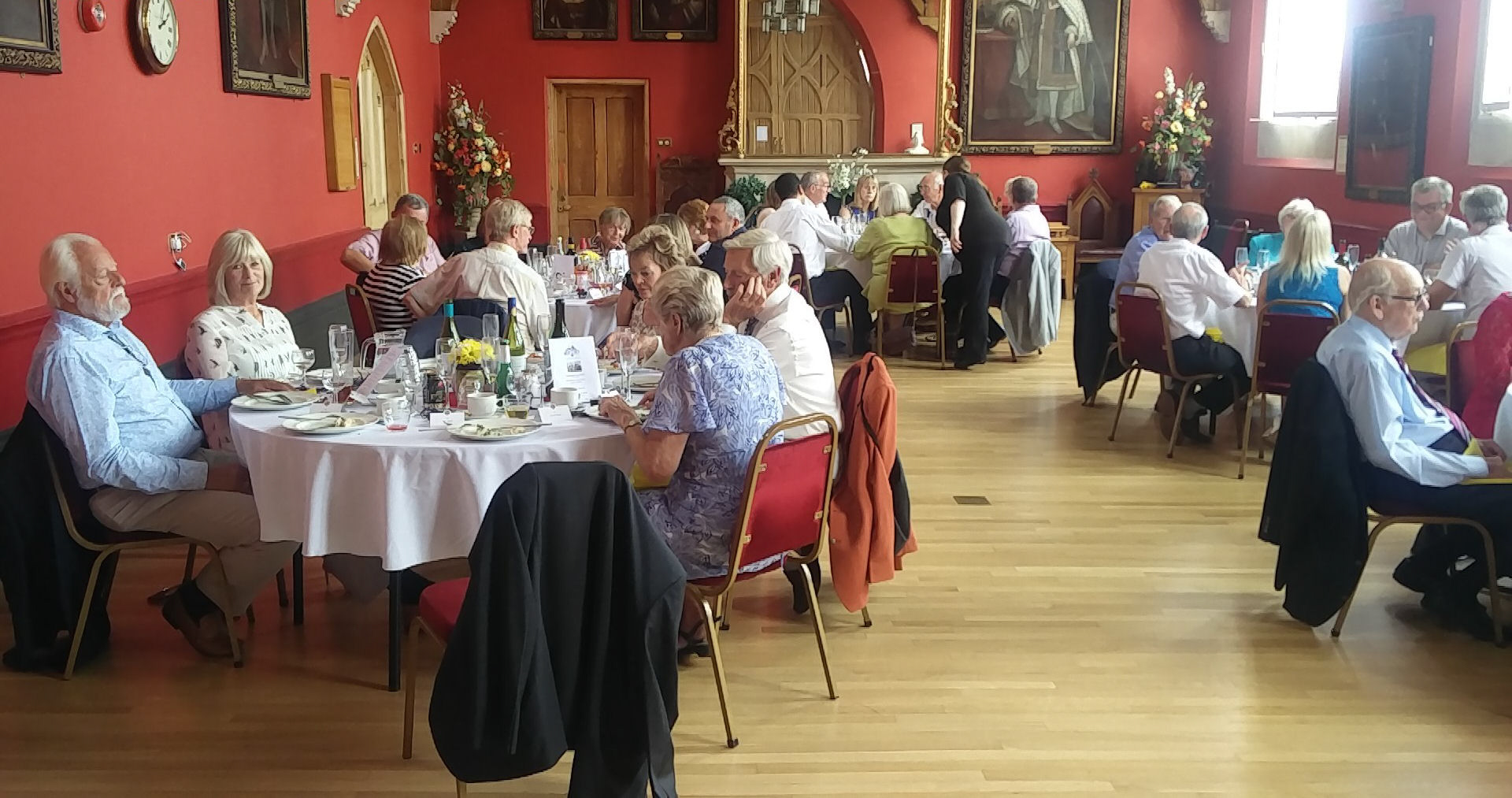 A number of members and their partners and friends had an enjoyable 3 mile walk, ending at the Queen’s Oak pub where we had a leisurely Sunday lunch 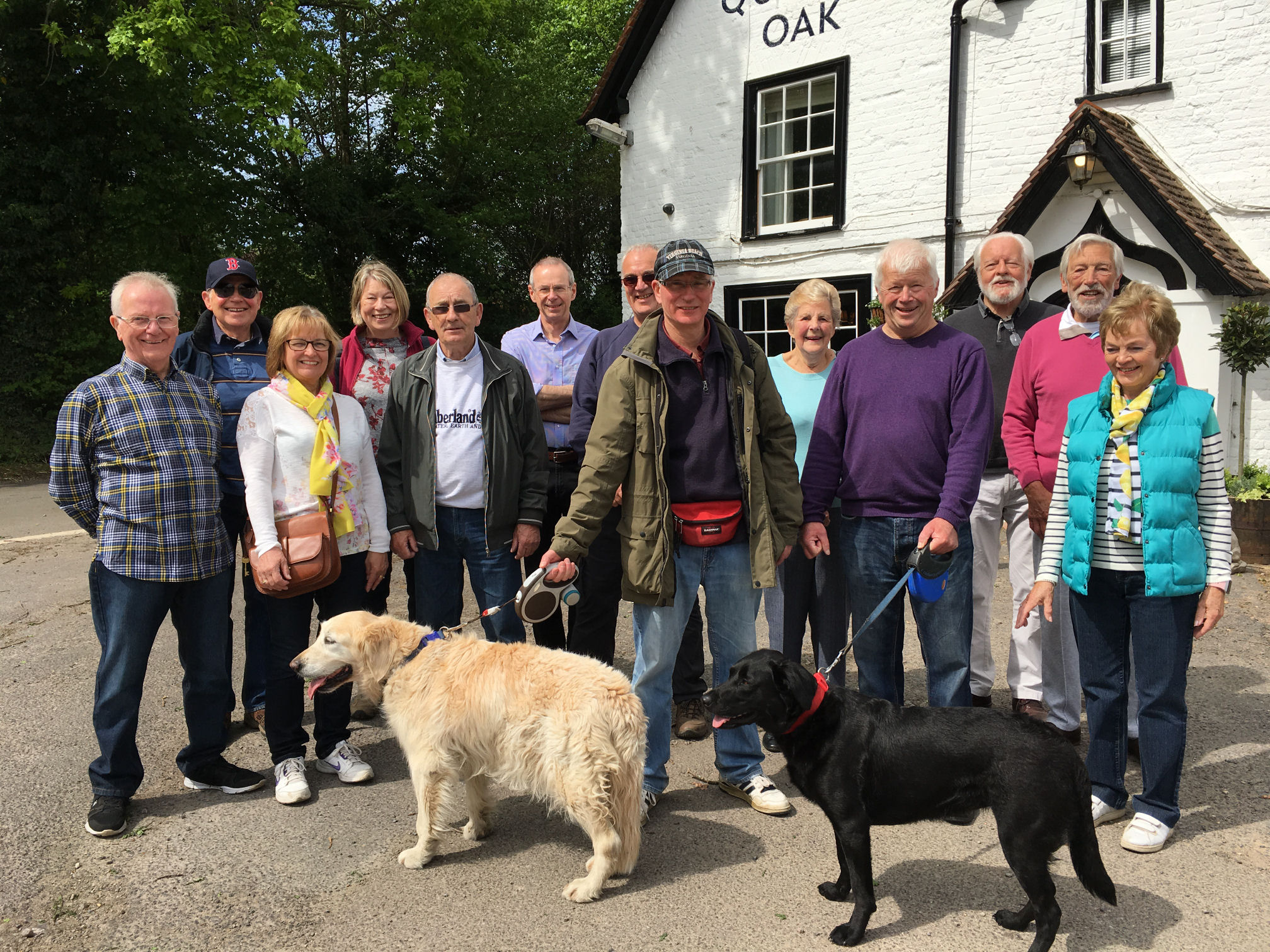 We had a fun night at the Frog and Wicket, playing bar skittles

This was a great night out, themed on the 1930’s.  Everyone got into the spirit and dressed in the appropriate style.  Big thanks to everyone involved in organising it, especially Lyn, Jean and Candy who prepared over 100 meals!

As well as being a fun event, it raised over £2,300 for our charity account 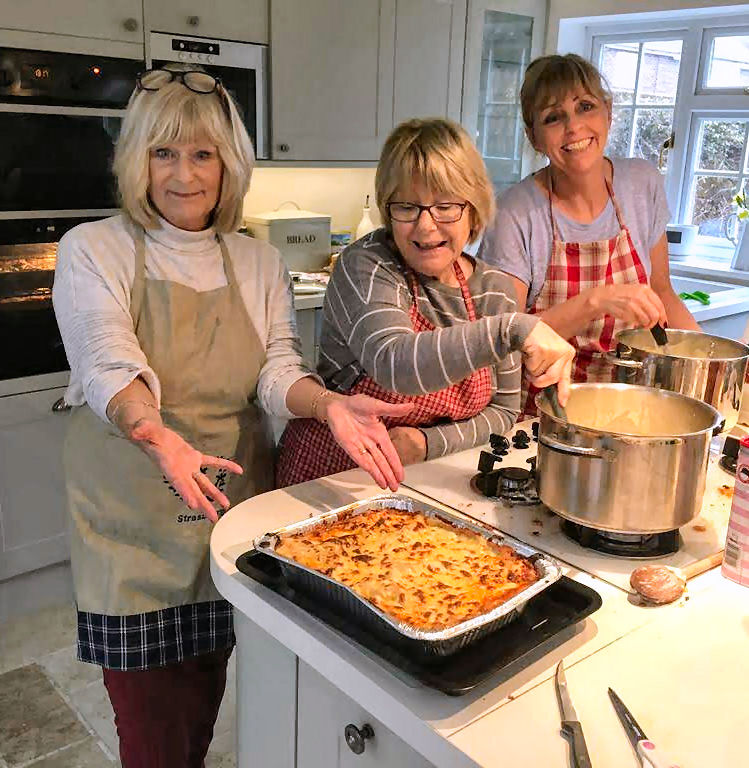 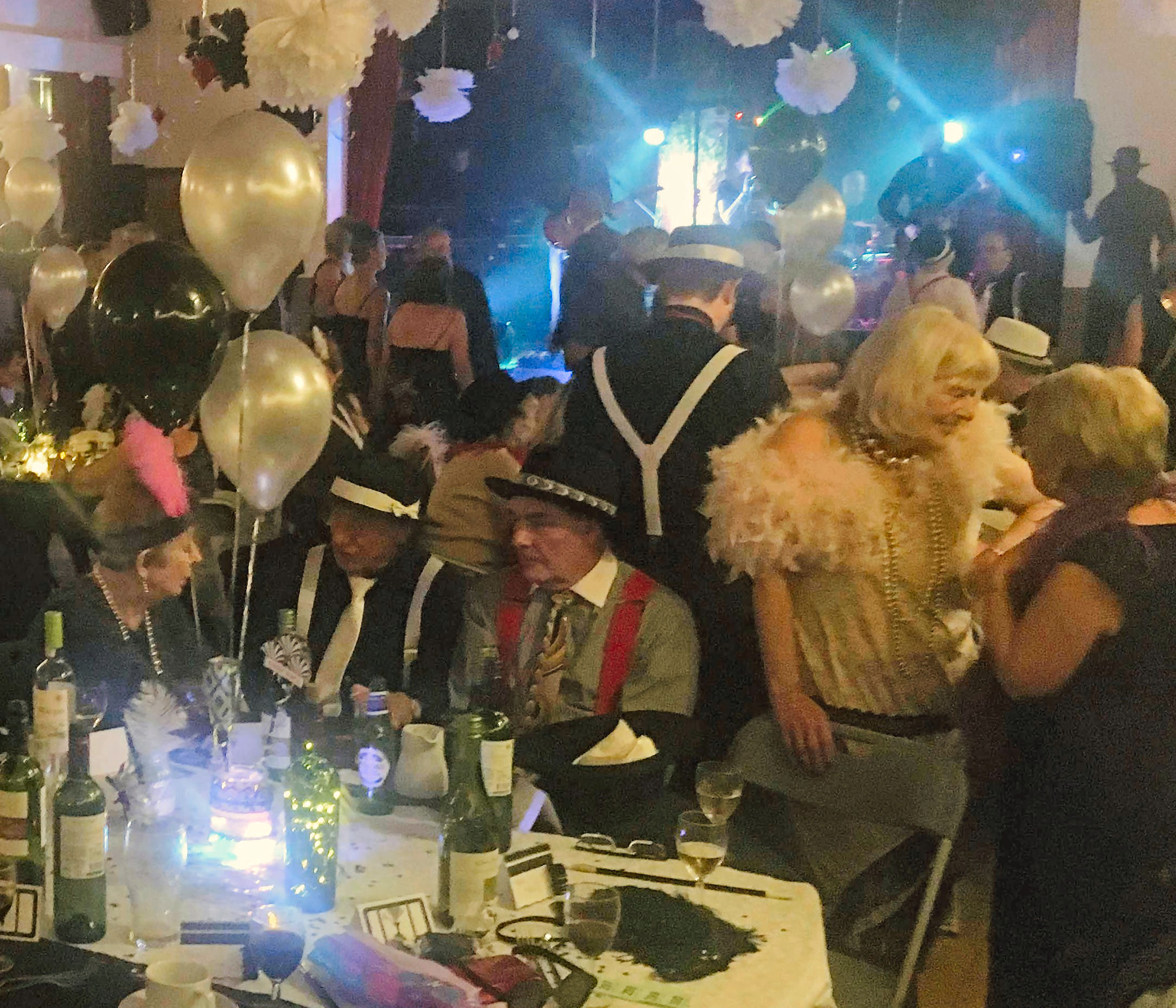 Our Christmas Dinner at Bearwood Golf Club was a fun evening with over 40 of our members, partners and friends. After a festive Christmas meal we enjoyed communal carol singing, followed by a very amusing rendition of the Twelve Days of Christmas customised by Lyn Baily to summarise Lions Club events. 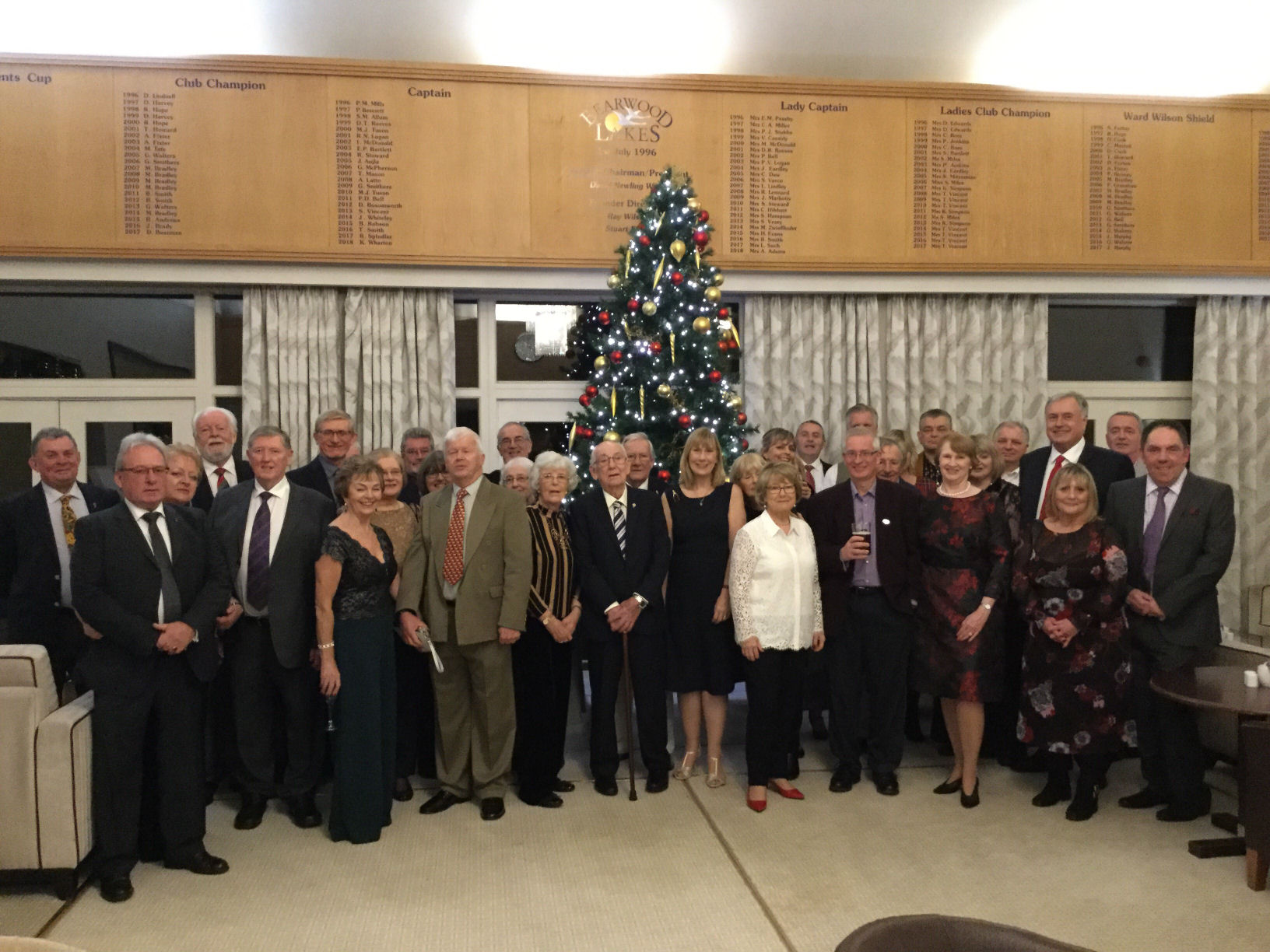 Wokingham Cricket Club provide us with a venue for our club meetings so it was fitting the we used their club house for a Quiz Night.  We had 13 tables, each with up to eight team members who competed to answer challenging questions posed by the quizmaster, Ian Grange. 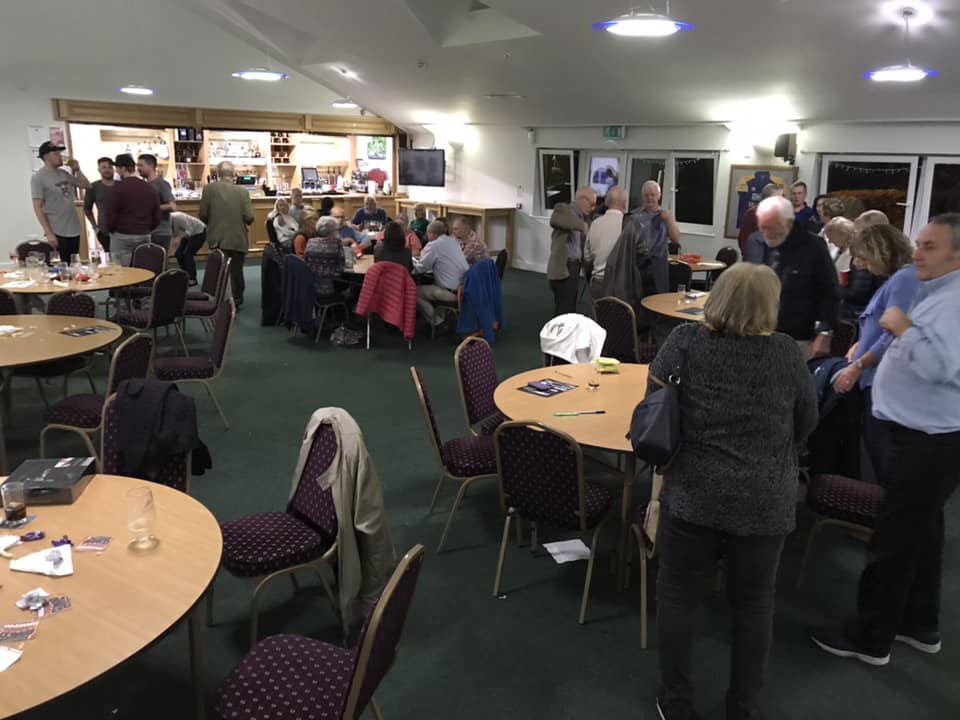 About 15 of our member had a fun evening out playing ten-pin bowling at the Wokingham Superbowl. 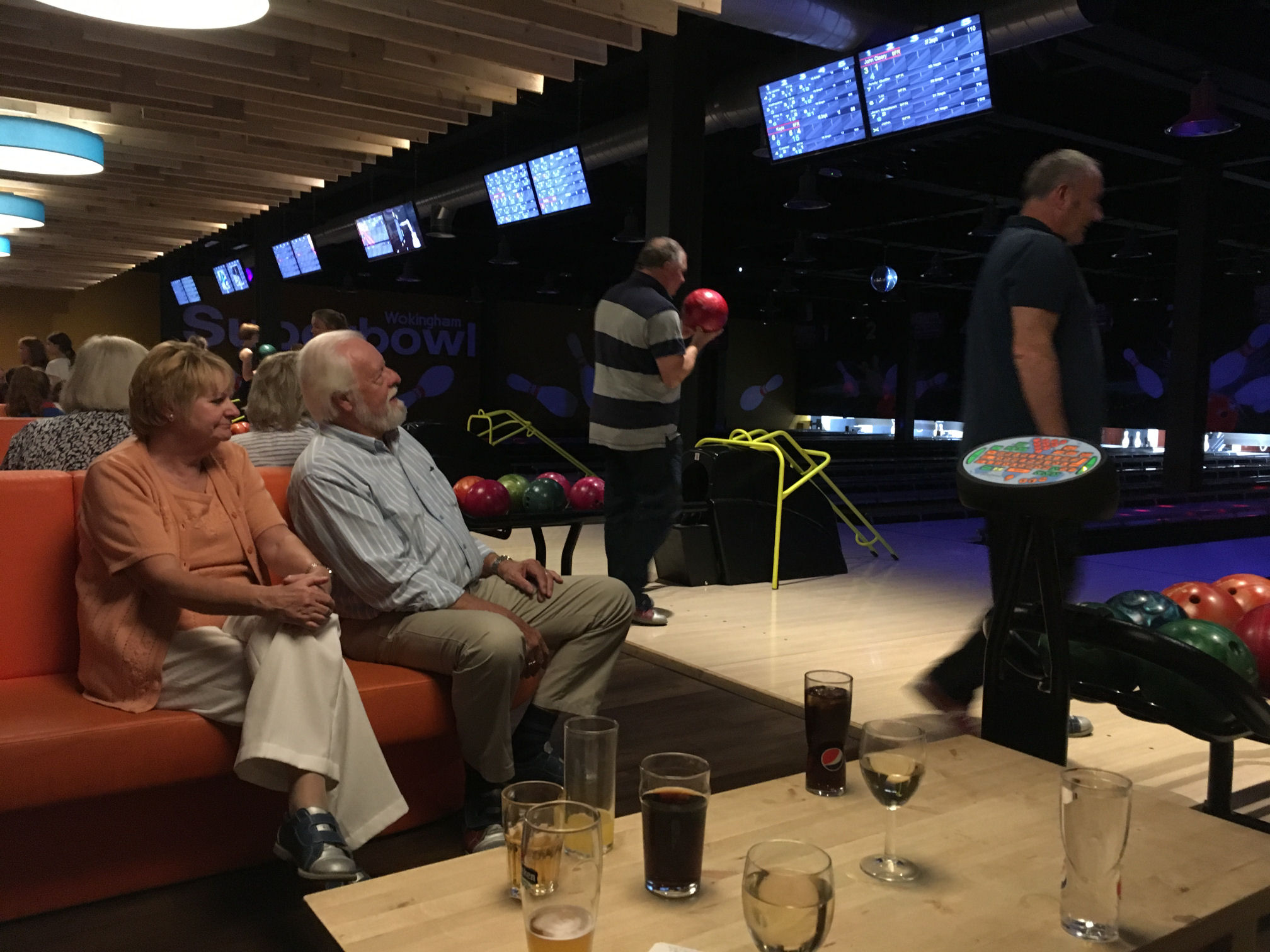 The Lions year runs from 1st July 2018 until 30th June 2019. Previous president Sue Jackson was unable to attend the luncheon. Lyn Baily, the club’s new vice president, carried out the handover on behalf of Mrs. Jackson.

She welcomed Debbie Slay as the new president, and said: “We are lucky to have you and your knowledge of Lionism and how it works. This has been gained over many years of experience by you, your husband Andy, and indeed your father before you. You have our trust, and I am sure it will be a very successful year under your guidance.”

Debbie thanked Suefor her year as president and reflected on the major events for the Lions Club over the last year.  These included the Centennial Tea Party at Wokingham Theatre for senior citizens, a Beer Festival at WADE, the Winter Carnival stall, the annual Can-Can appeal with food parcels for the elderly, and of course, the annual May Fayre, which is the Lions’ largest fund-raising event of the year. She also summarised the club’s many social events, as well as a Civic Award for Lion Jean Ibbotson.

Regarding the new Lion year, Debbie said: “We will be looking at a few new ideas, including taking our Tea Tent to a new venue in August. Of course, we will continue with our current successful events too. I’m particularly excited about our visit to our twinned club in Germany at the end of May next year, keeping our friendships going, even after Brexit!”

This was the time for our annual get-together to celebrate the holiday season.  This year’s event, at Bearwood Lakes Golf Club, was just as enjoyable as preveious years.

The Charter Lunch is the annual event at which we celebrate our achievements for the previous year and hand over the presidency to a new incumbent.  This year it was held at the Walter Arms in Bearwood.

It was one of the hottest days of the year, so after drinks on the terrace we enjoyed a nice meal before the outgoing president, Bob Westerman, gave a speech summarising the previous year.  He then handed over the chain of office to the incoming president, Sue Jackson.  John Cleary rose to give a most amusing report on Bob’s year as president.

18 members attended, along with their partners. It is customary to induct the Wokingham Town Mayor as a member of the club.  The town mayor is appointed in May, so the previous mayor, Gwynneth Hewetson, was in place during most of Bob’s year, and the new mayor, Peter Lucey, had only taken up his post shortly before the charter lunch.  Both were therefore invited to the event.

Every 2 years Wokingham Lions Club and the German Lions Club Offenbach in der Sudpflatz organise exchange visit, alternating the venue.  This year it was our turn to act as hosts to 9 visitors from the German club.  The weekend began on Friday with a barbecue hosted by Tim Hanton.  30 of our members spent a very convivial evening with the guests.

On Saturday we took them on a walking tour of Oxford, then punting on the river followed by a visit to Christchurch and the Bodleian Library.

On Sunday we went for a pub meal followed by a visit to the National Trust property Cliveden, before dropping them back to Heathrow for their return flight.

Many of our members and their partners had a great night out at Bearwood Lakes Golf Club to celebrate Christmas.  As always, everyone got into the spirit of the occasion and had a fun time. 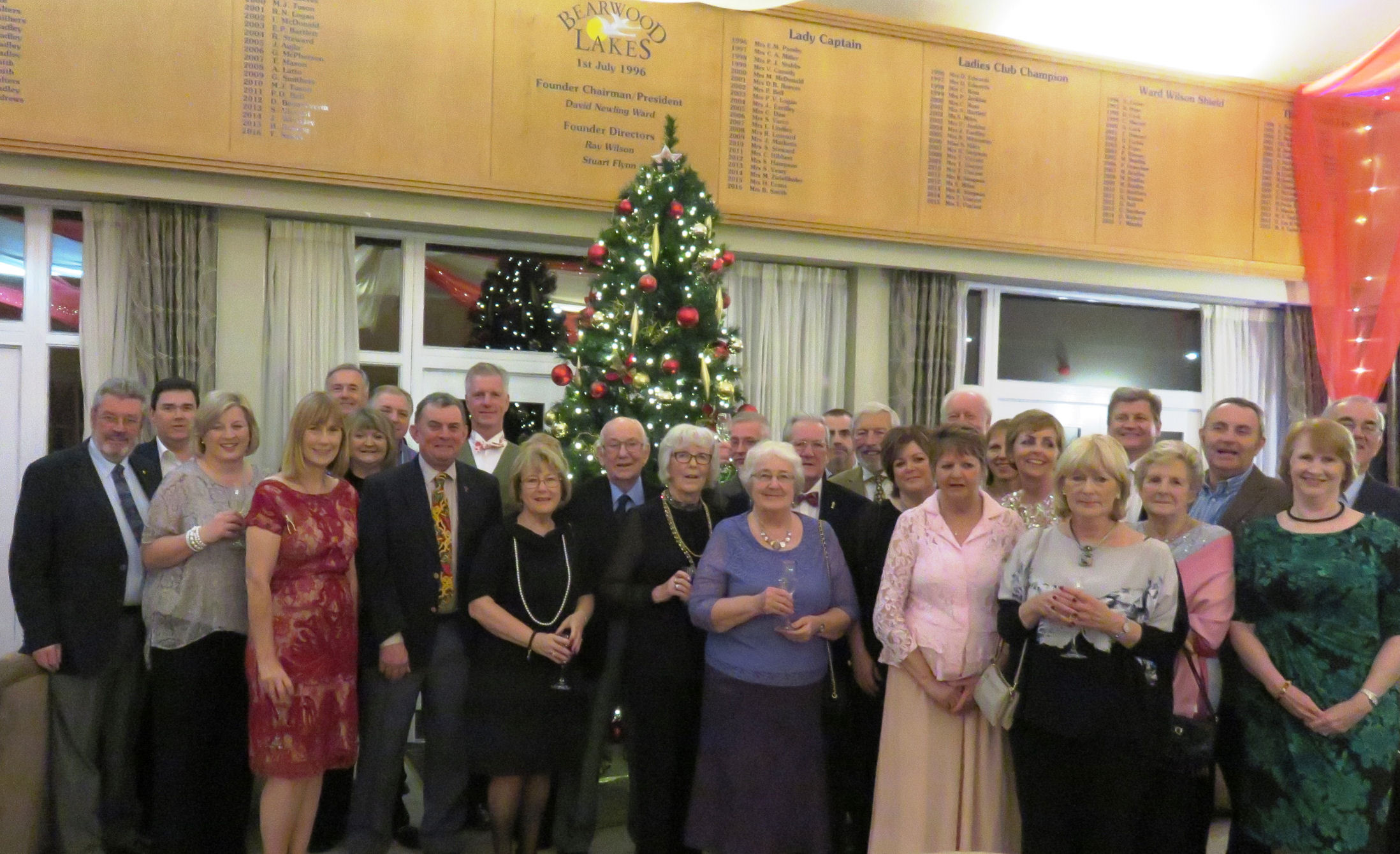 This was the second tour we took with Trevor Ottlewski, who is a mine of knowledge about the history of Wokingham.  The first tour took us around Rose Street, this second covered the Town Hall and Denmark Street.

We were all aware of the fantastic historic buildings in the town centre, but were mesmerised with the stories Trevor could tell us about them, and saw details that no-one would notice without his guidance

February’s social event was a visit to Slot-Car Racing at Pinewood. We invited Woodley and Earley Lions to join us and we plan to do more social events with other clubs in the future. Great fun was had by all, as can be seen by the photo!

We had a great night out at Wokingham Town Hall for our Bring-a-Dish evening.  The idea is that everyone brings a contribution to the menu, so there is a wide choice of food and plenty of it.

The men represented stations like Waterloo, White City and Wimbledon

A fun time was had by all at the annual Festive Dinner at Bearwood Lakes Golf Club.  Lions enjoyed a glass of champagne on arrival, three-course meal, mince pies, festive atmosphere, a few quizzes, some surprise entertainment and lovely company.

Best wishes for a very Happy Christmas, and Peaceful and Healthy New Year.

Alan Rouse (left) was named new president of the Wokingham Lions Club at a handover BBQ at the home of Bob & Frances Westerman on 1st August.  Tim Hanton, previous president, thanked members for their contributions to the club over the last year.

Playing French boules (also called petanque) was a lot of fun at the British Legion in Winnersh. We formed teams of four, and switched teams after every round. Afterwards, we enjoyed some drinks and fish or chicken and chips. Nigel Page and Patrick Allen were declared the winners at the end of the game.

A group of us went to the celebrations held in Runnymede to celebrate the 800th anniversary of signing the Magna Carta.  We had a picnic beside the Thames to watch a pageant re-enacting the time, and a flotilla of 200 boats, led by the Royal Rowbarge Gloriana.

Every second year we arrange an exchange visit with our twinned German Club, Offenbach in der Sudpflatz. This year was their turn to host us so 12 of our members and partners visited them from 15 – 18 May.

Some of the fun we’ve had in the past:

Stan Hetherington receiving the Gerry Aggett award for services to the community from the town mayor, Ullakarin Clark