We have developed 3 routes which are known as the Woodland route (5 miles), the Bluebell Route (10 miles) and the River route (15 miles).

The 5 mile route has been designed for those that are new to walking, or perhaps want to bring their children and/or dogs along for a nice day out in the surrounding countryside.

Starting Howard Palmer Gardens, it quite quickly passes along footpaths, through into the countryside and woodland without crossing any major roads. There is a bridge over the railway line

On the return leg you will pass the Henry Lucas Hospital, Wokingham’s only grade 1 listed building which was built in 1665 as an Alms House for the elderly of the area. 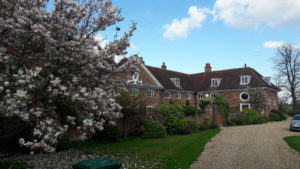 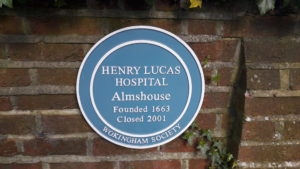 There will be a free “Nature Trail” included to keep the children occupied which involves looking for nature and wildlife along the route.

We have introduced a 10 mile route at the request of parents who wanted to challenge their children to a longer walk without making the “leap” to 15 miles.

Both the 10 and 15 miles routes start on the same paths as the Woodland route and then split off in the Gorrick Plantation, taking a bridleway that emerges on Nine Mile Ride. This is probably the most well known of the “rides” that passed through the royal forests, created throughout this area for Queen Anne (and later George III). In old age, she was unable to ride with the hunt, so liked to follow in her carriage instead.

You then pass around Heath Lake, which consists of an area of woodland and heath land in the parish of Wokingham Without. The shallow 7 acre lake is the only acid lake in Berkshire. 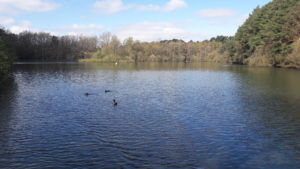 This means it has a naturally high pH which supports several rare plants, including the water-milfoil and the 6 stemmed water crowfoot. Designated as a site of special scientific interest.

Next comes East Berks Golf course and then close to Crowthorne station. The path takes you between Wellington College where numerous famous past pupils including James Hunt, Will Young, Rory Bremner and George Orwell were educated. You will cross the Railway track on a foot crossing, emerging at Ambarrow Car Park. Shortly after this the remaining 2 routes split with the 10 mile route taking in some marvellous Bluebell woods and the 15 miler following the River Blackwater, passing through Finchampstead. The 5 extension to do the 20 mile route starts and finishes in Fleet Hill near the Tally Ho PH

The Devil’s Highway is an old Roman road which passed from London to Bath via nearby Silchester. The 10 mile route passes across it in the area of Heath Pond in the Finchampstead woods and the 15 mile route encounters the old Roman Road in Finchampstead.

If you follow the longer route after climbing to the ridge to Finchampstead spare a moment at St James Church. This beautiful 12th century church uniquely has the burials of two holders of the Victoria Cross Britain’s highest award for bravery.

Both the 10 and 15 mile routes then rejoin each other in Finchampstead Ridges and return to the Woodland route in the Gorrick plantation. You know you are nearly finished when pass the Henry Lucas Hospital, Wokingham’s only grade 1 listed building which was built in 1665 as an Alms House for the elderly of the area.

How to down load a GPX file to a Smart Phone

This is recommended for all routes,

If you choose My Route You Mobile, you will need to register

Go to https://www.wokinghamwalk.co.uk/routes and select the download/print button for the route that you wish to download

In the Download section which follows select the type of download that you want i.e. Garmin, or Route You Android- app, Route You Apple-app etc

You will receive an email from Route You. Open this email and follow the on screen instructions